Pulling the motor is not needed. All you have to do is pull the cam cover and the right side crank cover. You will want to do this with the sparkplugs out to make turning the motor easier.

To get the cam cover off you will pull the water hoses that come out of the top of the motor. It's no big deal. The cam cover has a rubber gasket and can be reused. The right side cover has access ports so you can turn the crank. I prefer to go ahead and pull the cover off. It's only a few bolts and removing that cover makes it much easier to see what's going on. You will need a new gasket if you pull the right side cover.

To check the valves you are going to need a feeler guage with narrow blades. The normal one you probably already have won't fit under the cam caps on the intake cam. You can get one from the Snapon guy, or cut one down to fit.

Arm yourself with the specs. there is a spec for the intake and another for the exhaust.

Don't worry about the timing marks when you are measuring. Turn the motor until the cam you are wanting to check is facing away from the lifter. 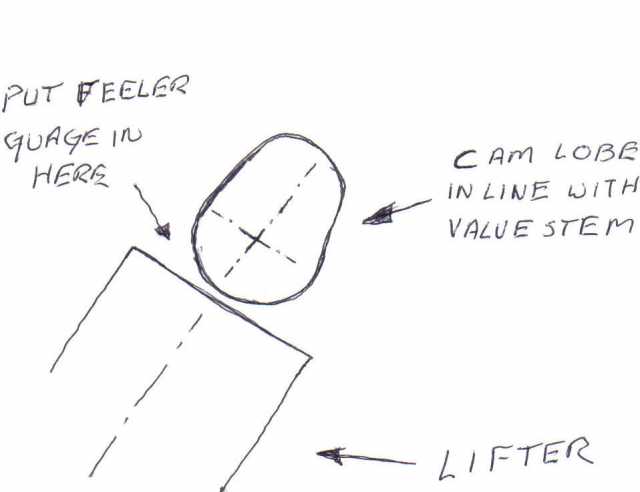 Traditionally, the timing marks were important for valve measurement to ensure that the cam position was correct, but on this motor you can look right at the cam and marks are not needed.

Right off the top of my head, I don't remember what the spec is for this motor. I work on all kinds of stuff, so I don't even bother trying to remember specs. Doing so results in mistakes! LOOK IT UP!

The easiest and quickest way to do this is to get the feeler gauge marked with both of those numbers out. The smaller gauge should go right in the gap between the cam and the lifter.

The gauge with the larger number should not go.

When they say .006-.008 they are saying that the gap between the cam and the lifter should be no smaller than the .006 gauge.

The other part of the spec is the .008. they are saying that the gap should be no larger than the .008 gauge.

It should not be possible to put the .008 gauge between the cam and lifter.

To keep track of this I make a simple chart like this. This motor has 20 valves, and keeping them straight is more than I can do in my head. 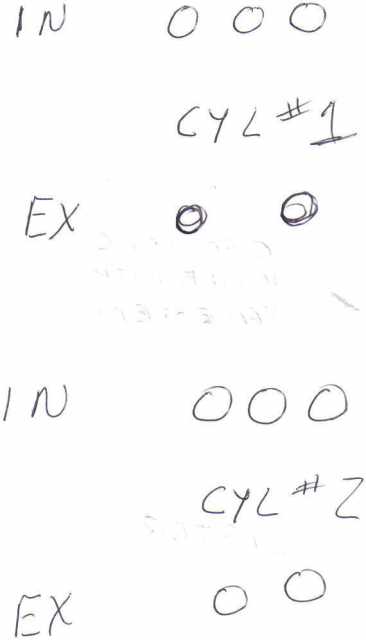 The five little circles represent the valves for each of the four cylinders.

As I do the measurements, I make a decision about each valve.

If I cannot put either gauge in the gap between the cam and lifter, then that valve is too tight.

I put a "T" next to the little circle that represents that valve.

If I can put both of the feeler gauges in that gap, then that valve is too loose.

For this valve, I will put an "L" next to the circle that represents the valve I just measured.

If one gauge will go, but the other will not- then that valve is correct. I put a check next to that one.

After I check them all, my little chart will look like this. 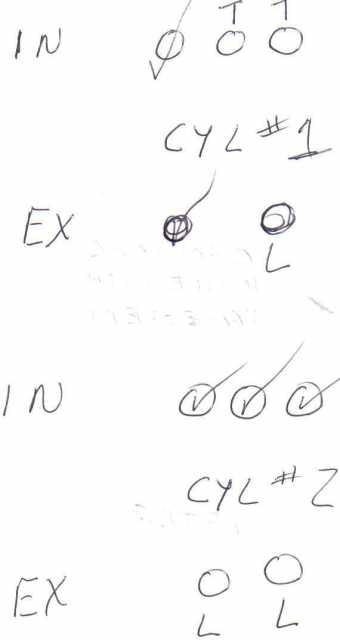 Hopefully, your motor will have all check marks. If it does, you can close it up and go riding. The motor on this chart has some loose valves, and some tight valves.

The service manual tells you everything you need to know. DON'T ATTEMPT TO PULL THE CAMS WITHOUT CONSULTING THE MANUAL!!!

Start by putting the motor at TDC an lining the timing marks up where they are supposed to be.

Now, look at it closely! It has to go back EXACTLY like it is before teardown, or it will trash it's self!

Look at that picture in the book, and look at the motor. if you are confused at all about these marks stop until you understand it!

After you are sure that you can put the cams back correctly, yank them out. put the cam caps, cams, and all the bolts together so you can get it all back in the same place it came from.

Here's another cheezy drawing of what's going on. 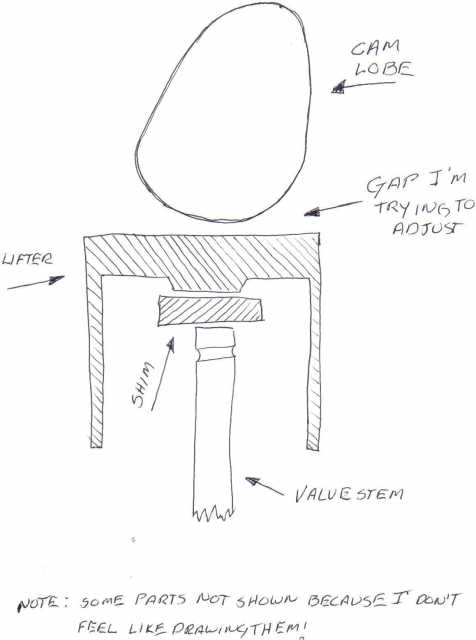 When the cams are out, you can pull the lifter out with a magnet.

Under the lifter, on the end of the valve stem, is a shim.

By changing the thickness of this shim, you can adjust the gap between the cam and the lifter.

When you get the shim out, you will see that it has a number on it.

That means that this shim is 2.75mm thick. Cool, huh? If the number is not readable, you can measure it with a metric caliper.

In the book, you will find a chart that will tell you what shim to use to adjust the valves. This is a neat thing if you are starting from scratch. You can measure the gap, look at the chart, and you might get it right. Maybe.

For a bike that's running fine, it's not needed.

A tight valve will probably only be one shim size away from correct. Rarely will it need two shim sizes.

So, here's the drill-

I look at the chart I made. It says there that the left intake valve on the #1 cyl is good, so I leave it alone.

The center valve on the intake side of cyl#1 was tight, so I yank that shim out.

I want to loosen that valve, so I need a thinner shim to make the gap between the cam and lifter larger. Normally, shims are sized in increments of five. They go 260,265,270,275, etc.

You can't buy these. The parts fiche only lists the zero and five sizes. Getting the valve to spec does not require the finer sizes, so don't worry about it.

If your dealer is not an A-hole, and you have done your part in developing a relationship with somebody there, they should swap shims out with you no charge. You would be surprized how much difference a dozen donuts twice a year will make in a situation like this.

If you think you don't need your dealer, and the internet is better than a dealer anyway, then you're going to have to buy shims.

See how that works?

There is a possibility that you are going to take that 270 shim you need out of another valve somewhere else in your motor.

This is cool if you can pull it off. Just be sure to NOT mix things up if you take more than one valve apart at a time. If you get it mixed up you will have to do it again, and nobody wants to do that!

After you get your hands on the right shim size, push it into the retainer on the top of the valve. Make sure it sits in there correctly. Then put the lifter back in.

There you go... you just adjusted a valve!

Repeat as needed until you have done them all.

After you have done all this, put the cams back in.

Work slow, keep it clean, and get it right!

Don't turn the motor until after you are absolutely positive you have the timing marks right!

Be sure to torque the cam caps to spec! It will affect the clearance!

After you are sure that everything about your cams is exactly like it was before you took it apart, GENTLY turn the motor by hand several full turns in the direction it normally turns. Use caution and feel for any resistance. If it makes any noises, or suddenly stops like it hit something, STOP! return to the timing marks and correct whatever is wrong! Forcing anything with the timing wrong will bend valves.

If it rolls through without problems and returns to the timing marks after a few turns, you're good!

They should all be in spec now. Mark your little chart as you go.

If you find any valves that are not in spec, you have to yank the cams again and re-adjust.

When you are adjusting your valves, all you need to worry about is "within spec". Some folks might feel that having them right in the middle of the spec is better than having some a little tighter and others a little looser.

Other folks might have an agenda. These people might want to tailor their valve lift by putting all the valves as tight or loose as possible.

Some folks might believe that putting them tighter or looser might be better for cooling the valves or avoiding wear on the cams.

This is all cool, and you can feel free to spend as much time on this as you want to.

As far as the bike and the people that designed it are concerned, "in spec" is just that. It's what you want and plenty good enough.

I hope this helps. I have tried to cover the important stuff and have included a few tips that will make this job easier.